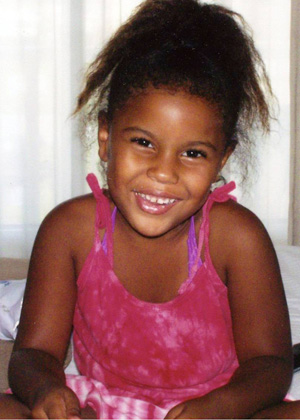 Vision problems are often difficult to detect in young children.  The child often uses the better eye to compensate, and since the child has never seen the world any differently he or she does not complain.  Undetected problems are very serious; if the problem goes on too long without treatment it can lead to lifelong vision deficits.

Although most of Erin Gossett’s family wears glasses, it never occurred to her mother that Erin would need them as well.  Erin’s sister was diagnosed with an underdeveloped nerve in one of her eyes, but Erin never demonstrated any difficulty seeing so her mother never suspected a problem.  When Erin brought home the results of her school vision screening, she was shown to potentially have hyperopia in her left eye.  Her mom took her to the eye doctor right away, just as she was recommended to do.

At first, Erin’s vision seemed fine.  However, once the doctor covered up Erin’s right eye, she could not see below the big “E” on the chart.  After further testing, the doctor concluded that Erin’s left eye was the only one with a problem, so she received a prescription for a single  contact.  Erin is doing very well with her contact, and she is making great progress at being able to put it in and take it out all by herself.  Even though Erin had never expressed vision difficulties before, she quickly realized the improvement in her eyesight after wearing the contact.  “I can see, Momma!” she exclaimed after putting the contact in for the first time.

Erin is a Daisy Girl Scout, and enjoys participating in activities with her troop very much.  She also loves to read.  She is an extremely bright child who loves to try new things, and recently was named to the Principal’s List at her school.