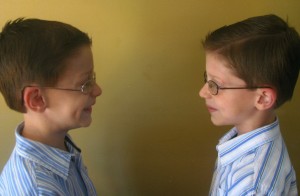 Meet Nolan and Samuel, two very close twin brothers. They spend a lot of time together riding bikes, fishing, swimming, and just playing outside. They also love visiting with their grandparents and playing with friends. Until the vision screening results from school were sent home, their mother had no idea there was a problem with their vision. Their vision had previously been checked, but no problems were found at that time.

The only thing the children complained about was being tired when they returned home from school.  However, their mom had received notes from their teacher saying they were not doing their class work.  She would deal with them sternly, not realizing the boys were not able to see well.

The school screening indicated that both boys had anisometropia, a condition that, if left untreated, can indicate or lead to amblyopia. Both boys were taken to see an eye doctor, who confirmed the screening results. Their mom found out later that her mother-in-law shared the same vision problem as the twins, and she was legally blind in one eye as a result.

The doctor said the children were very fortunate to have had the school screening that led to the early detection of the problem.  If it had not been found until later, it was possible they could have had irreversible vision impairment.

Both boys love to wear glasses and they no longer complain about being tired after school. Their mom reports that they are able to complete their class work and are doing much better at school.