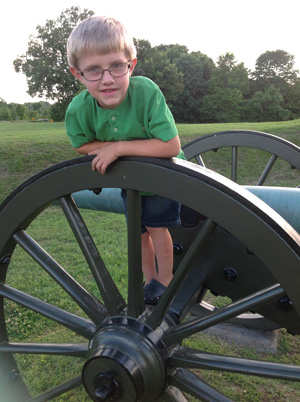 Mason was doing very well in school and had never complained about not being able to see well.  His family had no history of vision problems, so his parents never suspected he might have any trouble seeing well.

As a result, everyone was surprised when the results came back from Mason’s vision screening.  The screening showed normal indications in his left eye, but significant indications of farsightedness in his right eye.  A difference between the eyes such as this is called anisometropia, and it can indicate or lead to amblyopia.  If amblyopia is not detected and corrected at an early age, it typically results in permanent vision impairment in the weaker eye.

Mason was taken to see an eye doctor, and the screening results were confirmed. Glasses were prescribed along with patching of the stronger eye several days a week to help strengthen the weaker eye.

Mason enjoys being outdoors and especially likes riding his bike. He also loves skeet shooting with his dad, which led to an interesting observation.  His dad had previously noticed that when aiming, Mason would shift to sight with his left eye.  He and Mason both understand now that Mason was compensating for his weaker eye, but neither had realized it before.  The family reports that with his glasses, Mason’s shooting skills are much improved, and he is enjoying many other benefits from his corrected vision.